Here’s what you need to know about the proposed B.C. tax changes announced this week.

On Monday September 11th, B.C. Finance Minister Carole James announced proposed provincial tax changes. The budget includes increases in personal and corporate tax rates. Specifically, the general corporate income tax rate will increase while the small business corporate income tax rate will decrease, and a new top personal income tax bracket will be introduced for income in excess of $150,000. In addition, there will be a 50% reduction in Medical Services Plan (MSP) premiums for all B.C. residents.

While the full announcement and details from the BC government can be found here below is a summary of the main items that will impact our clients.

As a result, B.C.’s corporate income tax rates will be as follows:

Effective for 2017 and subsequent years, the budget for the small business venture capital tax credit is increased to $38.5 million from $35 million.  This allows for up to $11.7 million in additional equity financing for qualifying corporations annually.

Effective January 1, 2018, a new top personal income tax bracket will be added for income in excess of $150,000 with a personal tax rate applied of 16.8% (previously 14.7%).  In addition, the tax rates that apply to eligible and non-eligible dividends will also be adjusted as a result of the changes in the corporate tax rates noted above. 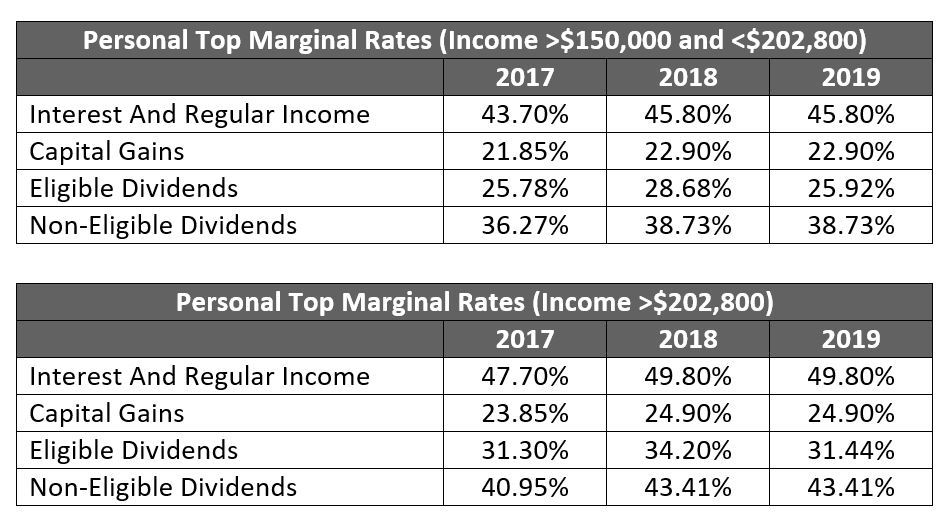 As previously announced in the February 2017 budget, the fair market value threshold for eligible residential property under the First Time Home Buyer’s Program is increased to $500,000 from $475,000.  The partial exemption continues and applies to homes valued between $500,000 and $525,000.

As previously announced in the February 2017 budget, the threshold for the phase-out of the home owner grant has been increased to $1.6 million from $1.2 million for the 2017 tax year.

In addition, amendments will be made to ensure that information gathered under the Home Owner Grant Act and the Income Tax Act (BC) can be shared for improved administration and enforcement of both acts.  Specifically, income tax administrators will have increased access to assessment date.

This entry was posted in Budgets, Tax and tagged BC Budget, corporate tax, income tax, tax. Bookmark the permalink.